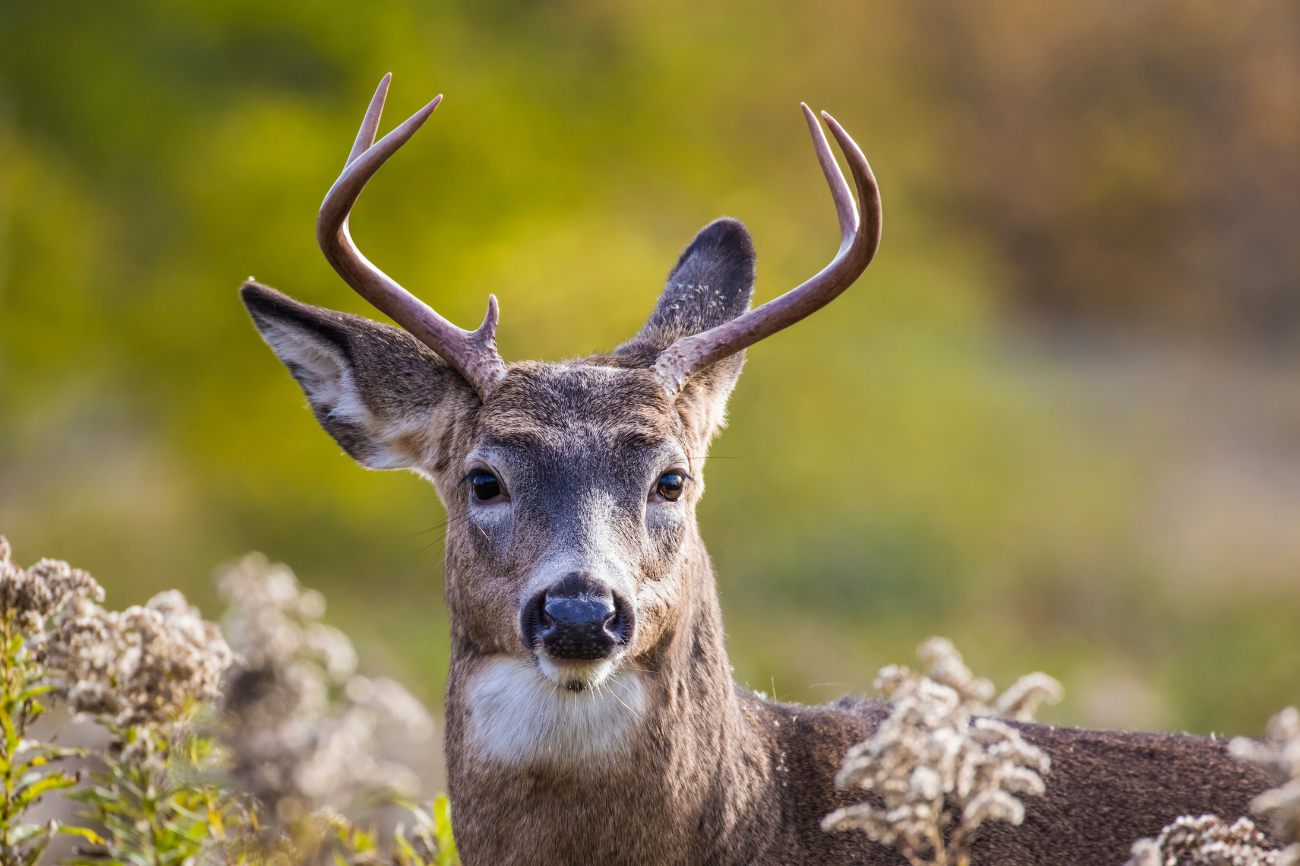 To scientists’ surprise, more than 80 percent of Iowa’s wild and captive white-tailed deer population tested positive for SARS-CoV-2 (the virus that causes COVID-19 in humans) between late November 2020 and January of this year.

This revelation comes from a study posted to the pre-print server bioRxiv earlier this month. The percentage of positive samples increased throughout the course of the study, and one-third of the 283 samples ultimately tested positive.

“Our studies show that while we were distracted with the pandemic in human populations during the winter months of 2020 and 2021, an outbreak of SARS-CoV-2 was silently spreading amongst the deer herd quite unbeknownst to us,” says Suresh Kuchipudi, a co-author of the article and a clinical professor of veterinary and biomedical sciences at Pennsylvania State University.

The authors note that the white-tailed deer, who is instantly recognizable to fans of Disney’s Bambi, is the country’s most popular wild deer species: Around 25 million call the U.S. home. The discovery that a significant portion of this population is also vulnerable to SARS-CoV-2 now raises questions about the potential for an evolved version of the coronavirus to jump back into humans — which increases the likelihood that COVID-19 won’t be wiped out completely and could instead become endemic, or a regular occurrence like the cold and flu.

Caught in the Headlights

The idea to extract the lymph nodes, which are located in the head and neck, from hundreds of deer and test them for active infection didn’t come out of thin air. For one, these samples were already being collected by the Iowa Department of Natural Resources as part of its routine, statewide Chronic Wasting Disease surveillance program. But perhaps more importantly, previous studies had already identified the deer’s elevated risk of contracting SARS-CoV-2.

That’s because the angiotensin-converting enzyme 2, or ACE2 receptor, of several animals bonds notably well with SARS-CoV-2, according to research published in the ​​Proceedings of the National Academy of Sciences in 2020. The coronavirus is extremely adept at attacking the ACE2 receptor in humans, as well as in other primates. But the researchers were surprised to find that three species of deer, including white-tailed deer, were particularly vulnerable as well.

“That’s why people started to look at deer,” says Tony Goldberg, an epidemiology professor at the University of Wisconsin-Madison School of Veterinary Medicine who was not involved in the studies. “It wasn’t because they were getting sick — deer weren’t showing up for COVID vaccinations. It was because the scientific community predicted that they would be susceptible.”

This year, studies demonstrated that white-tailed deer could be inoculated with the virus and transmit it to one another, and that a large portion of the animal’s U.S. population had already developed antibodies against SARS-CoV-2. But the presence of antibodies, though indicative of indirect exposure to the coronavirus, didn’t actually prove that the deer were actively becoming infected.

The key evidence: Recent genome sequencing conducted by Kuchipudi and other researchers at Penn State showed that SARS-CoV-2 was present in white-tailed deer. This sequencing also indicated that related groups of virus variants found in the animals mapped closely to those circulating in human Iowans at that time, says Vivek Kapur, a professor of microbiology and infectious diseases at Pennsylvania State University and co-author of the most recent study. The patterns of genetic variation they observed strongly suggest that multiple independent spillover events traveled from humans to the deer, he adds.

“More people on public lands, limited food sources for the deer during the winter time, hunting-related disruption of deer movement and high infection burden among humans may all have contributed to the very high positivity rate we observed in the deer samples,” Kuchipudi says.

In fact, the peak positivity rate among deer samples coincided very closely with both the Iowa hunting season and the peak infection rate among people in the state. Over 80 percent of deer samples were positive during late November through January.

“We don’t know [how because] it does seem like it’s unusual for people to be breathing within six feet of a deer,” Goldberg says. “There may be a role for contamination of inanimate objects. So if I have COVID and I’m hunting deer or walking in the woods and I sneeze a big snot glob on a leaf, and a deer comes by a few hours later and sniffs it, that might do it.” He notes that researchers have speculated about other modes of transmission as well, such as through contaminated wastewater.

The Reservoir That Won’t Run Dry

The virus will likely stick around the new environment offered by deer, Goldberg says, and other experts share this view. “Considering how quickly it’s been spreading among deer, the fact that they don’t seem to be symptomatic, and the fact that the researchers found it in the lymph nodes of deer — which is usually indicative of a virus that has staying power — it’s probably not going away anytime soon,” he says.

Although the deer appear to be asymptomatic for now, researchers worry the coronavirus could continue to evolve as it passes from deer to deer and could eventually return to humans as something far more virulent and evasive of our natural (and vaccinated) immunity.

Additionally, other wildlife that interact with deer are also at risk. “Since deer are now identified as the second known free-living reservoir host for this virus, our studies highlight an urgent need to carry out comprehensive SARS-CoV-2 surveillance of white-tailed deer together with other susceptible animals such as deer, mice [and] skunks,” Kapur says.

In epidemiology, reservoirs are defined as populations or environments in which an infectious pathogen survives and thrives. We discovered that mink, for example, are susceptible to the virus when every mink in Denmark — a total surpassing 12 million from more than 200 farms — was culled over fears of COVID-19 late last year. Wild mink are also widespread throughout much of North America, but so far only one has been found to be infected.

Ultimately, the more animal reservoirs for the coronavirus, the more opportunities it has to evolve into something even more harmful. Within the next six months, Goldberg expects researchers to have a much clearer idea of where SARS-CoV-2 has spread within the U.S. deer population.

So far, there’s no evidence that the virus can be transmitted from deer to humans, but it remains a concern.

In fact, we have proof of infectious disease spreading from animals to humans: Each year, a few unlucky people contract plague from infected prairie dogs, for example. But the National Wildlife Health Center successfully reduced the mortality from plague in four species of prairie dogs in seven states by distributing peanut butter-flavored, vaccine-laden bait near burrows. The scientists incorporated a harmless dye that changed the color of the prairie dogs’ hair and whiskers under UV light, so they were able to determine that about 70 percent of the animals took the bait.

Similar efforts have attempted to combat rabies. Earlier this year, for example, more than 500,000 baits containing the oral rabies vaccine were dropped from aircraft in parts of North Carolina, with the intent of reducing the disease within raccoon populations. Although technologies for vaccinating wildlife exist, these endeavors are often difficult and expensive. So far, there are no such plans for white-tailed deer and the novel coronavirus.

Because the transmission of SARS-CoV-2 within deer populations depends on direct contact within dense herds, says Goldberg, one possible strategy for slowing the spread of the virus might be to thin those herds through changes to hunting practices. And for many hunters, deer season begins this month. Recommendations from the U.S. Department of Agriculture so far include prohibiting contact between wildlife and domestic animals such as hunting dogs, avoiding any game that is found dead, and wearing gloves and a mask while processing it.

While hunting practices may have contributed to the problem, they just might become part of the solution.