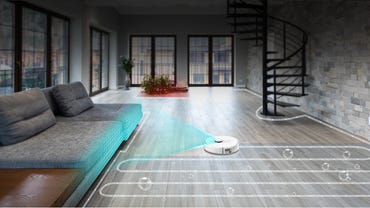 Smart 360 has released the latest version of its range of robot vacuum cleaners, the 360 S8 robot vacuum – and it is packed with features for use and management.

The 360 S8 robot vacuum has LiDAR SLAM navigation system and anti-collision sensors to detect and avoid obstacles. Its 320ml water tank wraps around the 360ml dustbin, so the S8 It will sweep and mop your floors at the same time.

Its app has multi-floor management, which can save up to five past maps and 5 recent maps.

The S8 operates at four suction levels: quiet, standard, powerful and max mode. In all of these modes – apart from max mode, the robot will increase suction when it encounters carpet to clear more dust from the carpet fibres.

The S8 uses a roller brush and a side brush to get to the edges of the room and, at 95mm high, can easily get underneath low spaces like the couch.

Connecting to the app is simple. Download the 360 smart app from the App Store, create an account and add the robot from the list. Connecting is quick and easy — but remember smart devices like these can only connect over 2.4GHz.

Once the robot has completed its first clean of the area, a comprehensive map of the area can be viewed in either 2 or 3D. The map intelligently assigns rooms that you can use when creating areas to clean.

You can set no-go and no-mop zones and specify lines where the robot will not cross. You are alerted to add no-go zones in the place where the robot vacuum gets stuck too.

You can also rename any of the rooms or elect to split a room in two or merge two rooms for scheduled cleaning zones.

Like most modern robots, the S8 has anti-drop sensors that prevent it from falling off ledges or downstairs and voice assistants work well.

Set a schedule and forget about the robot. It will automatically clean and mop your space. This robot does not have an auto-empty station, so you will need to empty the onboard dustbin regularly. It is not a big deal.

Emptying the robot is quick and easy, and the charging dock takes up considerably less space than a robot and auto-empty station does.

In use, I found that although the S8 robot vacuum’s 3,200mAh battery is supposed to give up to 120 minutes of cleaning time. However, I found that the robot went back to its dock after about 75 minutes to recharge.

When it was fully charged, it then returned to the last place it cleaned and continued the job.

I found that I needed to clip and unclip the mopping module onto the S8 as I have areas of carpeted floors and hard flooring. If I left the cloth mop on the robot, it would also wipe over the carpet in its travels.

If this is not an issue for you, then leave the mopping module on — but beware that when the S8 is stowed in its docking station, the mop might damage your porous hard floors.

Mopping is ok — but the mopping feature is for lightly soiled floors. The cloth wipes over the space and will not scrub any grimy areas. If you want a scrubbing mop, try a model like the
Roborock S7 with its vibrating mop

, or get a single function washing robot like the
ILife Shinebot W450

The robot finished cleaning, stopped, and immediately announced that it could not find the charging dock a couple of times. However, when I started the robot again, it easily went back to the charging dock.

Perhaps the map was not fully formed, giving the impression that the robot ‘forgot’ where the charging dock was. However, once the robot had navigated around the map two or three times, this did not seem to happen,

that crosses higher thresholds, has an accurate fully-featured multi-level map and LiDAR navigation.

If you love the comprehensive app and do not mind emptying the onboard dustbin every week, then this is the robot vacuum for you.

what is business management