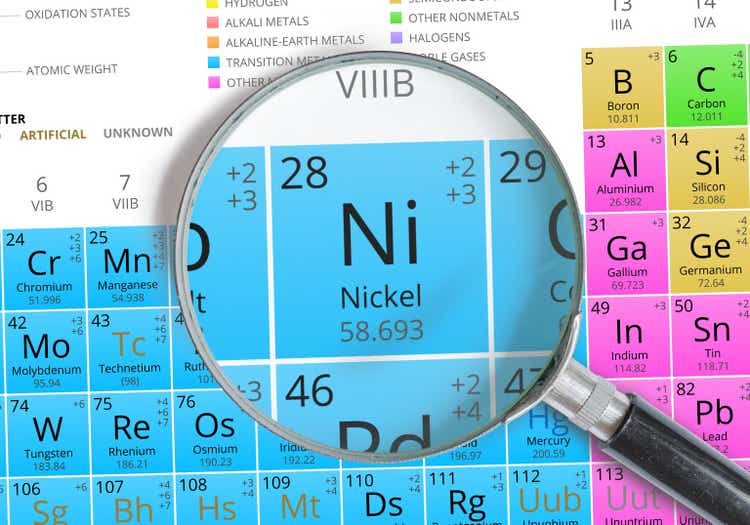 Battery nickel demand set to surge over tenfold this decade as the EV boom takes off (2020 chart).

Where next for nickel? It has been an extraordinarily volatile year for the nickel market… A strong short squeeze on nickel in trading on the LME has disrupted the market. There are also questions about whether in the medium to long-term there will be enough nickel supply – particularly Class 1 nickel – to meet an expected growth in demand for nickel-containing electric vehicle (EV) batteries… Christian Georges, head of commodity research for Société Générale, agreed, stating that about $25,000 per tonne would be more appropriate based on market dynamics. “But where they go from here depends upon the global economy,” he said… Even though the two major nickel-consuming sectors – stainless steel and EV batteries – are expected to continue to see increased demand this year, Richard Ferreira, director of market research and statistics for the International Nickel Study Group (INSG), said that, largely due to new investments in Indonesia and recovery in several other countries, the increase in nickel supply could be greater than nickel usage this year. While the INSG has forecast that this could result in the global nickel market switching over from a 168,000 tonne deficit in 2021 to a slight surplus (of approximately 67,000 tonnes) this year, Cole said that he believes the market will remain in deficit, albeit a much smaller deficit, of about 37,000 tonnes. Robin Bhar, an independent metals consultant, said that at least in the near term there continues to be some potential for prices to move higher for a short period of time before correcting, albeit likely staying at or above the pre-crisis $20,000 per tonne level throughout 2023 and 2024. He said that short-term firming would depend upon whether Russian nickel is directly sanctioned… while there is adequate supply of Class 2 nickel, the big question is Class 1 nickel supply, explaining that, given the projected growth of EVs, there is a need to increase Class 1 nickel supply by about 1 million tonnes per year by 2030, “And with the projects to do so currently being few and far between, and it is unlikely that they will generate more than 25,000-100,000 tonnes more Class 1 nickel [per year] over the next four to five years…

How a battery metals squeeze puts EV future at risk… Factory lines churning out power packs to fuel a clean energy future are being built faster than strained supply chains can keep up. A global rush to lock in stocks of lithium, nickel, cobalt and other key ingredients from a handful of nations has sent prices hurtling higher… While factories can be built in about 18 months, mines can typically take seven years or longer to come online.

S.Korea’s LG Energy Solution launches nickel processing plants in Indonesia… part of the company’s $9.8 billion investment in the country to produce electric vehicle batteries. The company will build a $3.5 billion smelter with the capacity to produce 150,000 tonnes of nickel sulfate per year…

Tesla supply chain problems are paramount concern – Musk… He explained that production has been hindered by raw material shortages and shutdowns of assembly lines in China.

Trudeau’s energy chief unveils low-carbon industrial strategy… In British Columbia, officials are particularly interested in hydrogen, critical minerals and the electrification of heavy industry, Wilkinson said. In Quebec, it’s battery manufacturing and how the critical mineral supply chain can feed into it. In Ontario, electric vehicle production is likely to get attention. And in oil-rich Alberta, carbon capture projects will be key… He pointed out that one tool the government wields is, of course, money, with C$3.8 billion ($2.9 billion) already earmarked for critical minerals in the April budget. On top of that, “we have a billion and a half dollars in the Clean Fuels Fund, we have eight billion dollars in the Net Zero Accelerator, we’re setting up the Clean Growth Fund, we have the Canada Infrastructure Bank,” he said.

The energy storage revolution has arrived… but who will have dominion over the megatrend of our times?… In 2022, lithium ion battery demand is growing at its fastest ever rate and is on course for 50% year-on-year growth… The raw materials fuelling these gigafactories have also witnessed a coming of age moment.

Lithium supply has increased nearly three-and-a-half times and will be over a 600,000 tonne industry in 2022 – the first time it has topped the half a million tonne mark.

Cobalt demand from the battery industry will reach over 70% of total global volume in 2022, the highest proportion of demand of any of the battery minerals, followed closely by lithium.

Nickel sulphate supply, the battery chemical needed by the lithium ion battery industry, will approach 500,000 tonnes in 2022, more than a 3.5x increase over a 5 year period.

Graphite remains the highest intensity mineral in the lithium ion battery by weight with over 570,000 tonnes of natural flake to be consumed in 2022.

Yet, consumer demand for electric vehicles surpasses our ability to supply them. Waiting times for EVs are lengthening, a lithium ion battery shortage is hitting many automakers, and, most crucially, key raw material prices are at all-time highs.

Vale plans a US$1.7B Voisey’s Bay expansion plan to boost their nickel production. Construction began in 2018 and is expected to be complete by 2022. You can read more here.

Vale advances Canadian nickel sulphate project. Vale S.A (“Vale”) informs it has concluded the prefeasibility study for a proposed nickel sulphate project in Quebec, Canada, representing an important milestone for the project development. This strategic initiative highlights Vale’s focus on delivering low carbon and high-purity nickel products into the growing electric vehicle industry. The proposed project in Bécancour, Quebec, would be the first-of-its-kind fully domestic nickel sulphate facility for the North American market, leveraging current and future production of low carbon and high-grade nickel from Vale’s world-class Canadian operations. Based on feasibility work to date, the project would have annual capacity to process 25,000 tonnes of contained nickel into nickel sulphate, the chemical compound used in the production of pre-cathode active materials for nickel-based lithium-ion batteries. The project’s final investment decision and schedule is contingent on a range of factors including downstream battery supply chain integration and requirements, as well as board and regulatory approvals.

BHP’s Nickel West (includes the Mt Keith nickel mine in Australia) has a Measured and Indicated Resource of 4.1Mt contained nickel with a Total Resource contained nickel of 6.3Mt, with an average grade of 0.58% Ni in sulphide ore. Nickel West produced 80 kt of nickel in FY 2020. Stage 1 production of the Kwinana Nickel Refinery is aimed to be 100ktpa nickel sulphate.

No nickel related news for the month.

Glencore trading update… Tracking YTD performance, we expect our Marketing segment’s half-year adjusted EBIT to exceed $3.2bn (the top end of our long-term, through the cycle, Adjusted EBIT annual guidance range of $2.2-3.2bn). We currently expect more normal market conditions to prevail in the second half of the year.

Eramet:… -In a press release dated 22 February 2022, Eramet announced the signature of a Memorandum of Understanding (MoU) for the sale of its subsidiary Aubert & Duval to a consortium formed by Airbus, Safran and Tikehau ACE Capital.

Sherritt announces results of modified Dutch auction to purchase secured notes and fixed price tender offer to purchase junior notes. “We are pleased with the strong results of our notes purchase offers, which will reduce the aggregate principal amount of notes outstanding by almost $60 million and our annual interest expense by approximately $5.5 million, while at the same time providing near-term liquidity to our noteholders”…

Completion of Western Areas scheme of arrangement. IGO’s Managing Director and CEO, Peter Bradford, commented: “The acquisition of Western Areas marks another important milestone for IGO as we continue to grow. Completion of this transaction enhances our position as a leading, independent producer of products critical for a clean energy future. I am also delighted to welcome the Western Areas team to the IGO family and am looking forward to working together as part of a strengthened IGO.”

Panoramic’s Savannah mine and mill has a forecast life of mine average annual production rate of 10,800t of nickel, 6,100t of copper and 800t of cobalt metal contained in concentrate.

On May 31 Nickel Mines reported:

The Company’s principal asset, an 8.56% joint-venture interest in the Ramu Nickel-Cobalt (“Ramu”) integrated operation in Papua New Guinea, had another outstanding year in terms of production, sales and cash flow. Highlights from Ramu and the Company during the year include:

On June 23, Mincor Resources announced: “First payment for nickel concentrate received as Mincor delivers production restart on time and below peak funding guidance. Receipt of first cash-flow results in another milestone delivered by Mincor.” Highlights include:

Horizonte is developing its 100% owned Araguaia Nickel Project (Araguaia) as Brazil’s next major ferronickel mine.

Tamarack is a high grade nickel-copper-cobalt project located in Minnesota, USA, with considerable exploration upside. Talon Metals owns a 51% project share, with potential to further earn-in to a 60% share by 2026.

Owns the West Musgrave nickel-copper project in Western Australia as well as several other mines.

On June 24, OZ Minerals announced: “Novamera and OZ Minerals enter into Memorandum of Understanding.” Highlights include:

The Cathedrals, Stricklands and Investigators nickel-copper discoveries (at Mt Alexander) are located on E29/638, which is held in joint venture by Western Areas Limited (25%) and St George (75%). St George is the Manager of the Project with Western Areas retaining a 25% non-contributing interest in the Project (in regard to E29/638 only) until there is a decision to mine.

Sama enters into Share Purchase Agreement for sale of 4,000,000 shares in SRG Mining Inc… After the closing date, Sama will then own 15,180,377 common shares of SRG, representing 13.356% of the issued and outstanding shares of SRG.

Canada Nickel completes additional property acquisitions. Mark Selby, Chair and Chief Executive Officer said, “The acquisition of Bannockburn is highly complementary to our southern cluster of properties at Sothman, Midlothian, and Powell. The Bannockburn “B” zone has already been successfully tested for 600 metres of its total 1.3 kilometre strike length with multiple intervals in excess of 0.3% nickel and has smaller, higher grade potential at other zones on the property. Historical mineral processing work confirmed presence of heazlewoodite, similar to Crawford, and the ability to generate a 35% nickel concentrate.”

Investors can view a CEO video here, or a CEO interview here on Trend Investing.

Kalgoorlie Nickel Project feasibility study update… The total KNP Mineral Resource Estimate is now 830Mt at 0.71% Ni and 0.046%Co (5.9Mt nickel, 380kt cobalt1). This is a world-significant asset located in an infrastructure-rich location, with independent assessment as the best operating jurisdiction in the world. Ardea continues to receive a high level of interest from groups wanting to secure sustainable and ethical nickel-cobalt offtake. Offtake remains linked to the Strategic Partner process and working with Ardea to complete the DFS, secure project development funding and building a globally significant battery minerals business. With the increase in corporate activity relating to the Strategic Partner process, Ardea has appointed a full-time CFO, Rebecca Moylan who we welcome to the Ardea Team.

Centaurus Metals is an Australian-based minerals exploration company focused on the near-term development of the Jaguar Nickel Sulphide Project, in Northern Brazil.

• Gillett and Gillett North mineralisation covers a strike extent of 1,150 metres and remains open along strike and down dip…

Note: Some of the above companies are covered in the Cobalt monthly news.

Highlights for the month were:

As usual, all comments are welcome.