We ended our OnePlus Nord CE review wondering if there would be a successor for the same or if the Core Edition was just a one-off experiment. Guess what? The OnePlus Nord CE 2 is here and sooner than we expected. The first Nord CE did not impress us much as we believe the company cut a corner too many and seemed like a generic phone with OnePlus branding and OxygenOS. The company has made a few amends in its successor without inflating the price.

Are those enhancements enough to justify its existence? We will answer that and more in our OnePlus Nord CE 2 review. We will take a quick look at what’s good or otherwise, and how it is different in comparison to its predecessor in half a dozen key areas. Let’s get the ball rolling.

The rear profile of the Nord CE 2 is completely different from its predecessor, and in some ways is quite unique and cool. The plastic back on the Nord CE is replaced with scratch resistant glass; the first of many improvements. A single glass block covers the entire back and also encompasses the camera module that has a bit of a protrusion. The camera layout is a lot more like the Nord 2 than the CE. The company has stuck to a single front camera located in a punch-hole.

The back does attract a few smudge marks but they aren’t too conspicuous on the Bahama Blue variant. The frame is still made of plastic though and has a glossy finish. Despite the glass back, the Nord CE 2 is just 3 grams heavier than the CE and weighs a comfortable 173 grams. It is slightly slimmer too at 7.8 mm in thickness. A popular OnePlus feature, the alert slider continues to be absent on the second Nord CE phone too.

However, the 3.5 mm headphone jack has been retained. You also get a USB-C port and a solitary speaker next to it along the bottom edge. OnePlus has also added a MicroSD card slot in addition to dual SIM trays; a pleasant surprise. The placement of the volume rocker along the left edge and the power button on the right is spot on, and you don’t have to stretch your fingers much to access them. One design element that can improve further is the chin or the bottom bezel, which is quite prominent on the Nord CE 2. 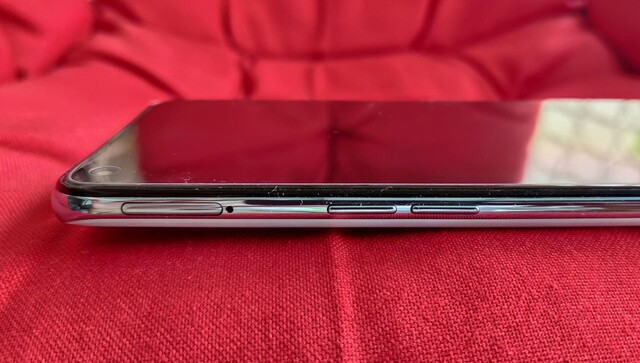 Just like every other Nord phone, the Nord CE 2 sports a 6.43-inch AMOLED display with 2400 x 1080 resolution and 90 Hz refresh rate. But unlike the Nord CE, the display here is HDR10+ compliant. It is protected against scratches by a layer for Corning Gorilla Glass 5. The colour reproduction and sharpness are pretty good for the segment, and you get two colour profiles – Vivid and Gentle. While the former is more vibrant, the latter is a lot more easier on the eyes and closer to natural once you increase the colour temperature a little.

This is one area where the Nord CE felt a little underpowered. OnePlus has opted for a Mediatek Dimensity 900 5G SoC on the Nord CE 2. While it doesn’t exactly set our benchmarks on fire, it is definitely a step up from the Qualcomm Snapdragon 750G on the Nord CE, but understandably not in the same league as the Dimensity 1200 that powers the Nord 2. The Nord CE 2 does feel smoother in day to day operations as compared to its predecessor. We got its 8 GB RAM variant for review.

Moving on to benchmarks and performance in numbers, the Nord CE 2 slots in between the Nord CE and Nord 2, but closer to the former. It scored 726 and 2160 in Geekbench single core and multi-core benchmarks respectively. In comparison, the Nord CE managed scores of 641 and 1835, while the Nord 2 scored 815 and 2762 in the same tests. It returned a score of 7886 in PCMark Work 3.0 benchmark, which was surprisingly lower than the 8366 that the Nord CE scored.

In 3DMark Sling Shot Extreme – Vulkan benchmark, the Nord CE 2 got an overall score of 3666 – over a thousand points higher than 2590 that its predecessor could manage. Even in the 3DMark Wild Life benchmark, the Nord CE 2 stays comfortably ahead with 2032 points as opposed to 1113 on the CE. The Nord 2 is a different kettle of fish scoring more than double (4218 point) in the same benchmark. The difference in average frame rates is also significant (12.2 vs 6.7 vs 25.3 — CE 2 vs CE vs Nord 2).

Both the Core Edition phones are not so great at serious gaming but can handle less graphics intensive games reasonably well at medium settings. Having said that, the Mali-G68 MC4 GPU on the OnePlus Nord CE 2 performs noticeably better in this department than the Adreno 619 on the CE. The single speaker on the phone doesn’t make things particularly enjoyable though, and it’s best to use earphones or headphones. The Nord CE 2 is Bluetooth 5.2 compliant and has a 3.5 mm headphone jack too. The camera department of the Nord CE wasn’t very impressive and they have pretty much carried forward the same on the CE 2 with minor enhancements. You get the same 64MP main camera and it still lacks optical image stabilisation (OIS). The 8MP ultra-wide camera is also common to both. The only difference being the 2MP depth sensor is replaced by a 2MP macro camera, which isn’t any great like most 2MP macro cameras. The output is pretty decent in good lighting but starts to lose detail in fading light. The dynamic range is good and photos have better detail as compared to the Nord CE but they still appear a bit on the softer side. There are some AI enhancements but they mess up the colours, so best to avoid them. There is no telephoto camera here and the shots are digitally zoomed, and usable upto 2X tops. Lack of OIS doesn’t help either and you need a steady hand to get usable clicks. The 8MP ultra-wide camera is average at best but does a decent job in well lit conditions.

Low light photography on the Nord CE 2 can be a hit or miss. Some images exhibit a good amount of detail while others look flat. The noise is kept in check but the noise reduction algorithm seems a bit aggressive. There is a Night mode that improves things significantly when the light is too low, but it takes longer to capture and process the images. The objects look brighter than they are but have noticeably less detail. Best to stick to the main camera in low light in normal mode. Ultra-wide mode or zoom in low light produce below par results.

The 16MP front camera does a good job with selfies. They come out sharp and with natural colours. The front camera also has a portrait mode which works well when there is sufficient foreground and background separation. The rear cameras can shoot 4K videos at 30 fps and 1080p videos at up to 120 fps. However, EIS works only when recording 1080p videos at 30 fps; best to stick to that for best results. The output is acceptable for the segment. The front camera can record videos in Full HD resolution at 30 or 60 fps. 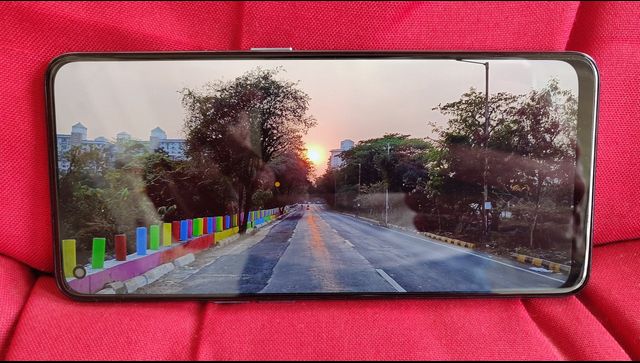 OnePlus has retained the 4500 mAh battery on the Nord CE 2, but fast charging has been bumped up to 65W from 30W. The battery lasts for a day and a half of moderate use which is quite good. The bundled 65W ‘SuperVOOC’ charger (yes, OnePlus is openly using Oppo nomenclature now) manages to charge it from 1 to 100% in about 40 minutes. It may be 4 to 5 minutes slower than the Nord 2, but a solid 25 minutes faster than the Nord CE, which is mighty impressive.

The Nord CE 2 runs Android 11 with OxygenOS 11.3. OnePlus promises two major Android updates and three years of security updates for this phone, which is good, but there’s a small catch. Android 12 has been out for several months now, and a phone debuting in 2022 should ideally launch with that version of the OS. Despite the company committing to two Android updates, it may only go as far as Android 13, which feels like a raw deal but not a deal breaker.

Due to the code unification, the ColorOS influence can be seen in certain places like the camera app (which is straight out of Oppo’s playbook) but it still largely feels like OxygenOS here, which is great. There is hardly any bloatware either and the overall experience is smooth and pleasant. The OnePlus Nord CE 2 should get the OxygenOS 12 update in a few months, and I am not sure how things will pan out then. Going by my experience of the same on Nord 2, it feels a lot less like OxygenOS.

The Nord CE starts at Rs 23,999 for the 6 GB RAM and 128 GB storage variant and just a thousand more for the 8 GB RAM variant with the same internal storage. OnePlus hasn’t bothered with a 12 GB RAM variant here, and it’s a sensible decision. Nor is there a 256 GB variant, but you can always use a MicroSD card to increase the storage in case 128 GB feels insufficient. All in all, you get a much improved version of the Nord CE (barring cameras) at the same price. However, the competition in the sub-Rs 25,000 segment is cutthroat.

Some of the top options in the segment would be Samsung M52 5G and iQOO Z5 5G. Both phones have a faster Snapdragon 778 chip, higher capacity batteries and 120 Hz refresh rate displays. While the Samsung has a Super AMOLED screen, the iQOO has a regular IPS display. Another couple of options I would like to mention are Xiaomi 11i 5G and Realme 9 Pro Plus. Both are powered by Mediatek Dimensity 920 chip (more powerful than 900) and have impressive cameras. While the former boasts of an 108MP main camera, the latter has one with OIS. The more powerful and impressive OnePlus Nord 2 isn’t out or reach either if one is willing to stretch the budget a little. So while the OnePlus Nord CE 2 does bring in a handful of enhancements over its predecessor, the company will need to do a bit more to stand out from the crowd in this highly competitive segment of smartphones. Let’s see if OnePlus gets third time lucky with the Nord CE 3.