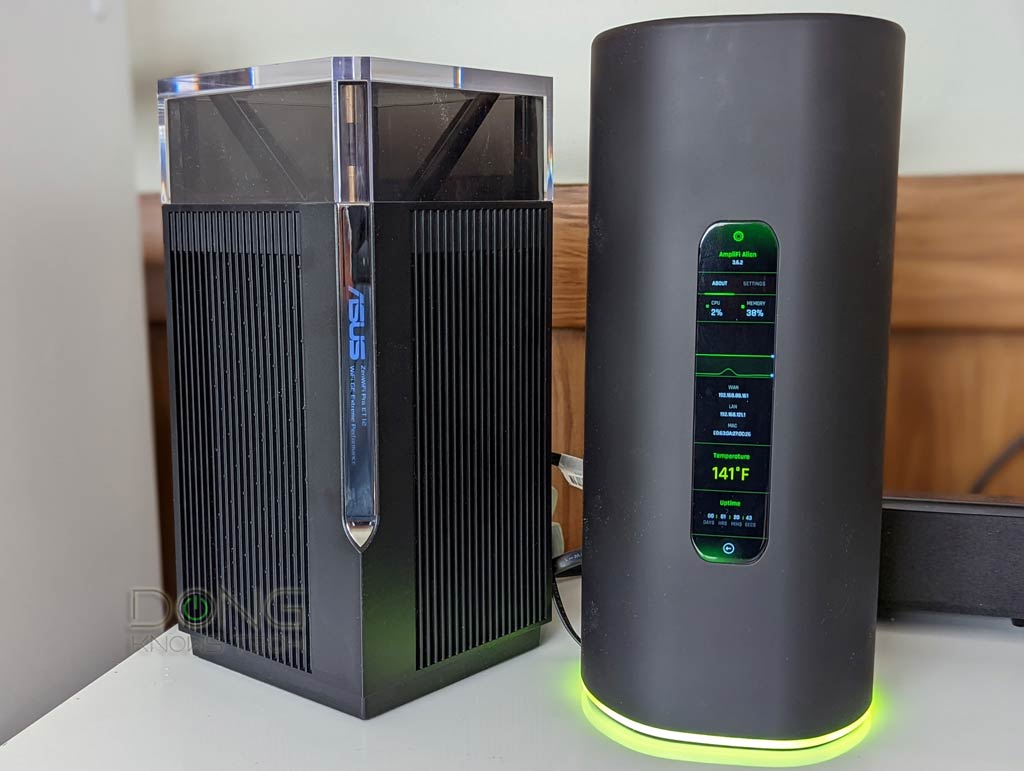 This post is a supplement to my piece of VPN as a whole.

It’s an Asus Instant Guard vs Ubiquiti Teleport matchup that explains the use of these two mobile-oriented add-on VPN functions for those owning an Asus or Ubiquiti AmpliFi router.

If you don’t know what VPN is or are unfamiliar with setting up a router, make sure you check out the primer posts in the related box below first.

On VPN and Asus and Ubiquiti AmpliFi routers

Instant Guard and Teleport are mobile applications that add a VPN connection to your mobile device on top of its Internet connection.

Specifically, no matter where you’re in the world, the device’s connection to the Internet is routed through your home router. As a result, you can keep it safe or isolated from the current network that gives it Internet access.

But their similarities, which are basically the benefits of a VPN connection, end there.

To use Teleport, you need to have an AmpliFi router, such as the Alien or the AmpliFi HD — all variants will work. Alternatively, you can use add Teleport add-on hardware unit to any existing network, though that’s a bit cumbersome — don’t bother!

The most important thing to note about Teleport is this: to use it, you must have a login account with Ubiquiti on your router and enable its Remote Management.

Specifically, you need to use the AmpliFi mobile app to manage your router instead of its simple web user interface, which, so far, applies only to the Alien — the AmpliFi HD has no web interface.

The point is the router will then be connected to Ubiquiti at all times via this account which can be a privacy risk. But this proprietary vendor-assisted management also facilitates the VPN connection.

As a result, Teleport is super easy to use — there’s no need to configure anything on the router’s end. On top of that, you can use this feature even when your AmpliFi router is on top of another router in a double NAT setup or working as an access point (bridge mode).

How to use AmplFi Teleport

Designed primarily for mobile devices, Teleport works via another app called Teleport. On Windows or Mac computers, you need a separate Android emulator application. Generally, AmpliFi routers do not have a built-in standard VPN server.

But in any case, Teleport is dead simple to use. Here are the steps:

And that’s it. That remote device is now part of the router’s VPN. Specifically, all of its Internet traffic will be routed via the router (and possibly Ubiquiti,) keeping it isolated from its current physical network.

From then on, on the remote device, you have the option to turn that VPN connection on or off using the Teleport app. As a rule, you only need a VPN connection when you, for whatever reason, want to appear as though you were at the VPN server’s locale.

And the owner of the router can use the AmpliFi app to manage the remote device, including giving it access to the local network resources or removing it from the VPN network.

By the way, if you have two AmpliFi routers at different locations, you can use Teleport to link them together into a single network.

To use Instant Guard, you need to have an Asus router — since mid-2021, most, if not all Asus routers support Install Guard, either right out of the box or via firmware updates.

If you own an Asus router, you might have noticed that it comes with a VPN section where you can set up one or more VPN servers. Note that the Instant Guard is separate from its standard VPN server function.

In other words, you can use a router’s standard VPN server, which supports all types of devices as long as you know how to configure the client, and Instant Guard, which works solely for mobile devices and doesn’t require any configuration.

That said, if you can make your phone or tablet work with the router’s standard VPN, Instant Guard is redundant — it’s not necessary. However, if you’re a home/novice user who doesn’t have time to be nerdy, Instant Guard is a much easier alternative.

A couple of things to note:

In other words, you don’t need to register an account with Asus. All you need to have is a DDNS domain.

Speaking of which, as a bonus, each Asus router also comes with a free DDNS domain and an SSL certificate. But you can use any other DDNS domain provider if you don’t want your router to connect to Asus at all.

Generally, setting up a remote connection via DDNS is involved and requires a certain level of networking know-how. However, if you merely want to use Instant Guard, Asus has made the process super easy as long as the following requirements are met:

Your router must be the only router in your home network — it must have direct access to the WAN IP. In other words, it won’t work if the router is working in the AP mode or you use a double NAT setup.

Those are the requirement for the DDNS connection to work. And while they seem like a big deal, that’s likely the case in most homes, as long as you’re willing to ditch that ISP-provided gateway.

With that, let’s find out how to make Instant Guard word.

The screenshots below will help with this step.

This step effectively turns on the router’s DDNS feature and connects it to a randomly selected domain using Asus’s free Dynamic DNS service.

If you have set up this feature before, the app will automatically use your DDNS setting, including when you use a third-party domain.

If you change this setting later, the app automatically will use the new DDNS configuration when the device connects to your local network’s Wi-Fi.

On the same mobile device:

Both Teleport and Instant Guard are excellent VPN solutions for mobile devices.

While Teleport is more flexible and easier to use — it makes sharing the VPN access with any remote party easy — it does require a login account for the router, which can be a privacy risk for the owner. Still, it’s much better on this front than using free VPN services of Google, Apple, or even Cloudflare.

In a nutshell, Asus’s Instant Guard is a streamlined version of standard VPN. As such, it doesn’t cause privacy concerns but requires a standard network setup to work.

Specifically, it requires a network that supports Dynamic DNS. On top of that, the VPN only works for those who have the access to the router’s settings, a.k.a, the owner(s) of the router. So it’s more restrictive in terms of who can use it.

But in any case, either of these two is much better than using a third-party paid VPN service that makes you pay for giving away your online data.

That said, if you own an Asus or AmpliFi router, it doesn’t hurt to check them out.