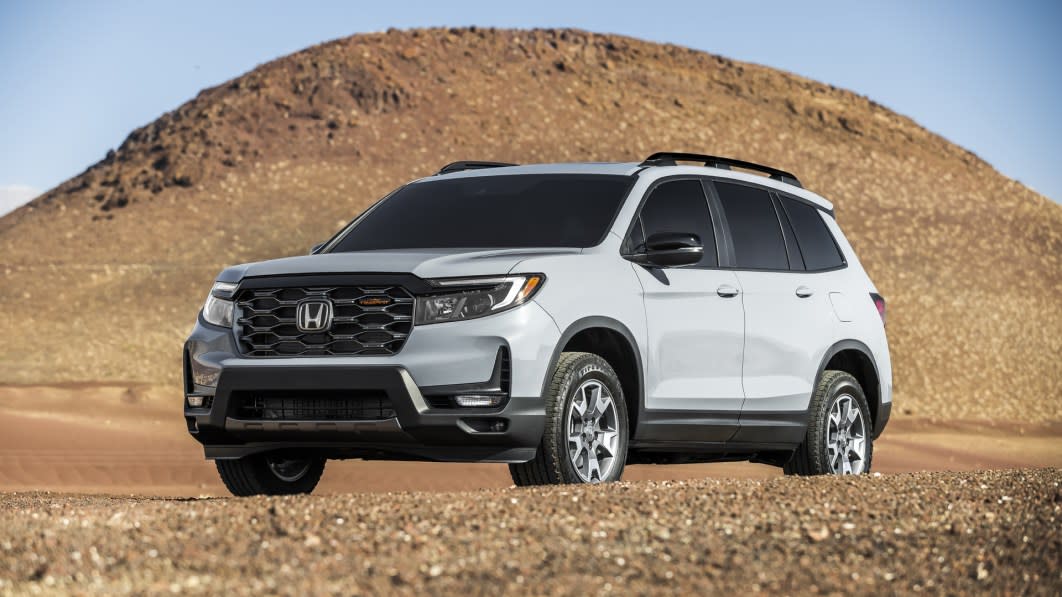 There’s no getting around it: the 2022 Honda Passport is a sawed-off Pilot. This two-row midsize SUV offers a nimbler, more-compact (but still very utilitarian) alternative for buyers who want a midsize SUV for hauling lots of things, rather than lots of people.

While the Passport may seem like an objective downgrade from the three-row, elementary-school-drop-off-approved Pilot, the Passport still offers a positively cavernous rear cargo area that can be accessed all the time, rather than just when the rearmost row is folded. It’s also shorter length-wise, making it lighter, more efficient, quicker off the line and easier to park. For those who aren’t regularly called upon for soccer practice chauffeur duties, the Passport actually makes a great deal of sense.

It also stacks up well to its diverse group of competitors. It’s more on-road friendly and fuel efficient than the Toyota 4Runner, yet more rugged and utilitarian than the similarly sized Volkswagen Atlas Cross Sport. It also has more space than the admittedly more luxurious Jeep Grand Cherokee and sportier Chevy Blazer. In other words, it’s somewhat a midpoint between them all.

The Passport got some styling upgrades for 2022, leaning into its more 4×4-esque nature. There’s even a whole new model to support this notion — the Passport TrailSport. This takes the already-vaguely-rugged two-row’s formula to a slightly more off-roady level, packing a more no-nonsense interior, beefier tires and some unique styling elements to set it apart from its more-pedestrian siblings. Unfortunately, the previous Sport model has been dropped entirely, significantly bumping up the Passport’s base price.

What are the Passport’s interior and in-car technology like?

If you’re trying to choose between Passport and Pilot, the interior design won’t be of any help: they are identical. That’s not necessarily a bad thing. Both share a common look that’s clean and functional, but hardly as visually interesting as what you’d find in a Chevy Blazer or Hyundai Santa Fe. Material quality is very strong for this segment and everything is put together exceedingly well.

Also shared with the Pilot is the exceptional interior storage. There are multiple door bins, two cupholders in each rear door, two areas to store a smartphone up front, and the giant center bin is big enough to hide a purse under its flat rolling cover. There’s even more storage underneath the cargo floor, including a plastic bin that can be easily cleaned and drained.

Interior tech is less impressive. There is a lot of it standard, true, but the means in which it is controlled can frustrate. There are insufficient menu buttons, no tuning knob and/or direct tune function, and the process for going between Honda and Apple/Android interfaces is excessively annoying. Many of these issues were corrected for the vastly improved system in the Accord and Odyssey, but the Pilot/Passport/Ridgeline family soldier on with ye olde interface. If there’s a reason to ponder something other than the Passport, this would certainly be it.

How big is the Passport?

For a midsize two-row crossover, the Passport provides an enormous, space-efficient interior. Only the Volkswagen Atlas Cross Sport comes close to its passenger and cargo space. The second row offers abundant head- and legroom, while also sliding considerably to bring kids closer to parents up front or to free up cargo space. Need to fit a rear-facing child seat? No problem. There’s more than enough space between rows and lower LATCH anchors for all three positions.

The cargo area is not only the biggest in the segment, but arguably the most versatile as well. Besides expanding thanks to the sliding back seat, it also houses a large bin under the floor that can hide valuables or secure dirty items from the clean interior (it can also be removed to be cleaned). The cargo area itself is deep, wide, tall and offers 41.2 cubic feet of space — far more than anything else in the segment not named Atlas. The same can be said when the seats are lowered, with 77.9 cubic feet of maximum space. You’d have to step up to a longer three-row model like the Pilot to get more.

What are the Passport fuel economy and performance specs?

The Passport has only one engine and transmission offering: a 280-horsepower, 3.5-liter V6 paired to a nine-speed automatic and either standard front-wheel drive or optional all-wheel drive. This engine is strong, smooth and according to the 0-60 times posted by various publications, acceleration can be the strongest in the segment. Fuel economy ratings are typical: 20 mpg city, 25 mpg highway and 22 mpg combined with FWD, and 19/24/21 with AWD (including TrailSport). Confirming the highway number, we achieved 24.8 mpg in 340 miles of mostly rural highway driving.

The standard Passport can tow up to 3,500 pounds, which is about average in the segment. The TrailSport bumps that to 5,000 pounds with its inexpensive utility package, besting even the AWD Chevy Blazer, which boasts up to 4,500 pounds of trailering capacity.

A lot like a Pilot! The springs are slightly stiffer, so the Passport doesn’t bob and roll as much on the road as the more boatlike Honda Pilot. Its steering is also slightly sharper. Then again, it shows a reluctance to be hustled along a windy road, similar to its big sibling. In other words, despite being sportier-feeling than the Pilot, is still not a sporty vehicle overall (virtually the same thing can be said of the Volkswagen Atlas Cross Sport). Think of it as a more comfortable, refined and spacious alternative to the rugged, outdoorsy Toyota 4Runner. For those who are looking for that rugged edge, note that the TrailSport’s knobby 18-inch tires do contribute a bit more road noise but their taller sidewalls make for an excellent ride.

The only real wart is the nine-speed automatic transmission. Though improved from other iterations that always seem to be in the wrong gear or slow to engage the correct one, there are still moments of unusual behavior. There can be a little too much engine braking off throttle, for instance, as if you’re in the wrong gear. The Sport mode also makes the transmission a bit silly in its aggressiveness — you can’t use it around town without it herking and jerking you about. It also too-quickly overrides lower gears that have been manually selected by the included shift paddles. This is annoying on downhill grades. If the car is just going to take over, why include the paddles at all?

What other Honda Passport reviews can I read?

We test the highest Passport trim level, featuring all the bells and whistles possible. We also took it on a road trip to see how it handles the sort of family-oriented outdoor adventures it was apparently designed for.

We go glamping in the 2019 Honda Passport

The Passport is squarely aimed at folks in their 30s, with or without kids, who want to take their SUV on outdoorsy weekend adventures. So we did just that.

Our First Drive Review of the 2019 Honda Passport. We discuss why the Passport, which doesn’t break much new ground or stand out in the segment in any objective way, may move the needle for Honda in the great crossover wars.

Honda Passport vs. the competition

You can check out our extensive comparison of the Passport and some of its competitors. Note that the Santa Fe has been significantly updated for 2021 and the Volkswagen Atlas Cross Sport has been introduced since this was published.

OK, so we actually did this with the Pilot, but at least 90% of everything we cover also applies to the Passport interior.

How much is the 2022 Passport’s price and what features are available?

Pricing for the 2021 Honda Passport starts at $39,095 for the base EX-L trim with front-wheel drive (all prices include the $1,125 destination charge). All-wheel drive is a $2,000 option and brings with it a special Snow/Sand/Mud driving mode. AWD is standard on the TrailSport and Elite.

TrailSport brings its own styling and standard all-wheel drive, plus a set of 18-inch all-terrain-ish Firestone tires meant to look the part.

Stepping up to the Elite is steep, but it adds so much popular equipment like ventilated front seats, heated rear seats, rear window sunshades and four USB ports, that we’re guessing most shoppers will end up choosing one. It would be a good call.

A full breakdown of each trim and its features, specs and local pricing can be found here on Autoblog.

What are the Passport’s safety ratings and driver assistance features?

While it’s great that all those systems are standard, they aren’t the best-executed driver assistance features. They are Honda’s previous-generation systems, as opposed to the updated ones in the Odyssey and Accord. The lane-keeping assist and road departure mitigation are far too sensitive or prone to false alarms with loud warnings of BRAKE! in the instrument panel accompanied by beeping. This can occur when not crossing either lane line. The adaptive cruise control system is also one of the least sophisticated and potentially annoying examples on the market. We go into more detail about this in our review of the Passport Elite.

In government crash testing, the Passport received a five-star overall score. It got four stars for frontal crash protection and five stars for side protection. Its rollover score was four stars. The Insurance Institute for Highway Safety gave the Passport the best-possible rating of “Good” in all crash tests but the new IIHS small overlap front: passenger side test where it got a second-best “Average.” The frontal crash prevention system (vehicle-to-vehicle) had previously received the second-best “Advanced” rating, but ratings for 2022 had not be published at the time of this writing. Ditto its headlight ratings.